Share All sharing options for: TST talks to Eric Dickerson

I want to thank Mr. Dickerson and the people at the Van Heusen Pro Football Hall of Fame Fan Initiative for making the interview possible.

3k: Mr. Dickerson, it's an honor to talk with you.

Eric Dickerson: Thanks for having me. 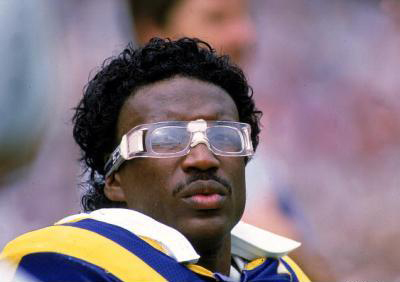 3k: First off, we all know you had an incredible career, a Hall of Fame career. But as a Rams fan, I have to ask - what do you remember most from your time with the Rams?

ED: Just the guys I played with. You know, we had some great teams. We had a blast, and I mean, that's the only thing I miss about football is the guys. That's it.

After the jump, Eric Dickerson talks about how he got to the NFL and the Rams, his legacy, his relationship with Steven Jackson and more.

3k: I went back through your Hall of Fame enshrinement speech, and I read that you almost didn't come to the NFL, almost didn't come to the Rams, because you were leaning toward the USFL. You said that your grandmother convinced you to enter the NFL Draft. Why were you leaning toward the USFL, and, I doubt it, but do you have any regrets about having opted to come into the NFL?

ED: I mean, (the USFL) was trying to compete with the NFL, the pay economy was different with more money, but I just wanted to play football, honestly. I had no idea I was going to be the second player taken in the draft, nothing like that. I was kind of in between and went to my grandmother. She was like my mother really; I would die for her, Viola Dickerson. And I was talking to her, and I said, "What do you think? Should I go to the USFL or the NFL?" And she thought about it and said, "Well, son, let me ask you one question. Which one has been around longer?" I said, "The NFL." She sat there for a second and said, "I would go with that one, since that one's been around the longest." And after that, I didn't even want to deal with the USFL; I didn't even want to go after she told me that. And it was the best decision she made for me. It was the same thing with going to SMU. It was the same. It was the best decision she made, and I'm just so happy that she made it for me. 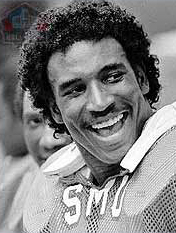 3k: Just to go back to your rookie season even though it's been rehashed so many times as the greatest rookie season for any running back ever - you get to Los Angeles, and the Rams are coming off a 2-7 record. The NFL had just gone through a strike-shortened season. The Rams' leading rusher was Wendell Tyler. Did you have a sense of what your role was going to be with the Rams and what you were going to be able to do in that rookie year?

ED: No, I didn't. I'll tell you something. Honestly, when I got to the Rams, I wasn't the starter; it was Wendell. We went through training camp, and I was not the starter; Jewerl Thomas and another player on the roster were starting. And I remember the first preseason game. We played the Washington Redskins. After the game, (coach) came to me and said we had to make some changes. He said, "We're going from two running backs to a singleback set, and you're the running back." And that was it. The rest, it speaks for itself. We had a great team though, the offensive line, the draft picks - it was an offense make to cook.

3k: Moving to the 1984 season, you ran the ball 11 times less, but set the single season rushing record. Did you think that record would stand this long? Did you think it would still be the record dozens of years later?

ED: To be honest, I didn't think about it. I thought I'd break again myself. I thought I could hit 2,200, even 2,300 yards. I didn't think it would last long, but it has. No one's really challenged it until recently, but not the rookie rushing record. It's a record I hope lasts a lifetime until I pass away. But no, I didn't think the single-season record would last a long time. I thought someone would come along and break it like myself. But I always say O.J. [broke 2,000 yards] in 14 games. I always give him that credit, because I was always a big O.J. Simpson fan.

3k: I know that you and Steven Jackson have exchanged text messages. Can you tell me about the relationship between you two? There's just a great legacy of Rams running backs: Eric Dickerson, Jerome Bettis, Marshall Faulk, and now Steven Jackson. What does it mean to you that this generation is still reaching back to you as one of the greats?

ED: Well, Steven's a player. I met Steven when he was a rookie, and we talked about that rookie rushing record. I said, "I'll bet you one of my jerseys that you don't break my record," and he bet me one of his. I still haven't gotten that jersey, and I'm still waiting. But it was a great day for Steven, and it showed the Rams' have had a great legacy at the position like you said. Marshall Faulk is a for sure Hall of Famer. He should go in this year, no doubt. When Steven's time comes, I think he'll go in too. It just shows one thing: the Rams have drafted great running backs. I'll say that much. It's tough for a guy to play on some bad teams, but he's been able to still put up numbers and be a professional. 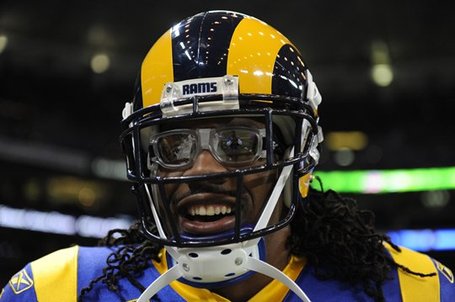 3k: At Turf Show Times, we have guys that are pre-Eric Dickerson, and we have guys that are post-Eric Dickerson. It's almost a benchmark that separates generations of Ram fans. If there's one message about yourself you could pass on to the younger fans who have only followed the Rams since Marshall Faulk or even Steven Jackson and may only know you through YouTube, what would you tell them?

ED: You know, Marshall, Steven, we're all great running backs. We all had our era. We each had our own style. And that's what I'd tell them. I was a different style of runner. I was a big back: 6'3" and physical. But I was fast too. And I was fast in my cuts. I made you pay if you tried to tackle me at all. I remember my daughter wanted to see some of my runs one day. She was about 19 years old, and she said, "Daddy, show me some film." And I had an old video of some highlights, so I showed her. She looked at me and said, "Wow, daddy. You were good! You ran so pretty!" So it's kind of hard to explain to kids how Eric Dickerson ran, how O.J. Simpson ran, how Walter Payton ran, but that's what I'd tell them.

3k: I know you're part of the Van Heusen Pro Football Hall of Fame Fan's Choice Initiative. Explain to people what it is and how they can get involved.

ED: Just go to fanschoice.com and you an actually vote on who you think should be in the Hall of Fame. We'll put that to the committee, who the fans pick. The committee won't automatically elect that person to the hall, but still - it's a new way to be heard. There are guys out there who should be in the Hall of Fame. Nolan Cromwell to me is a Hall of Famer. Charles Haley was one of the best players ever. Dexter Manley. These guys were just awesome, guys that people may have forgotten about. So if you go to fanschoice.com, you can vote for these guys and try to make sure they get their recognition.

3k: Mr. Dickerson, you're always welcome at Turf Show Times. Thanks for your time and taking my questions.

ED: Thanks for the opportunity.

Thanks again to Mr. Dickerson for taking the time to make this interview possible. 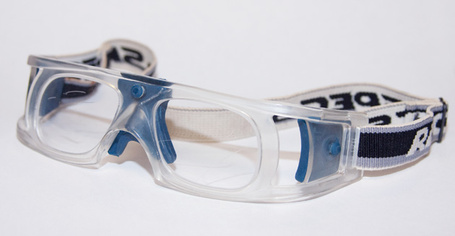