Captain of the Tailgate: The cultural shift

Share All sharing options for: Captain of the Tailgate: The cultural shift

I'll be honest - I'm not a tailgater. Sure, I've tailgated at Dallas Cowboys games and SEC football games, high school games and maybe a couple other sporting events here or there that I'm forgetting. But I don't consider myself "a tailgater."

You might see that as a contradiction; it might be hard to understand how someone who has tailgated dozens of times doesn't consider himself to be a tailgater. But the culture of tailgating has expanded so rapidly and so abundantly that I just don't feel comfortable placing myself in the same ranks of people who know they are true tailgaters.

Consider the fact that the tailgating community now has a census underway. Tailgating has a commissioner. You can find tailgating Twitter feeds. If you're the type that needs to see the merchandise to believe it, here's a catalog of random tailgating goods. And the reason I don't consider myself a tailgater is that I didn't know any of this until about 10 minutes ago when I start sifting through Google searches to find something to write this piece about.

Now I'm a drinker, y'all should know this by now. And if one of my boys (all Dallas Cowboys fans) calls me up and wants to hang out before a game, they know damn well I'm more than willing to sip it up in a parking lot. And if my cousin J wants me to come to an LSU game and supply the sauce while he works the gumbo, I can't resist this: 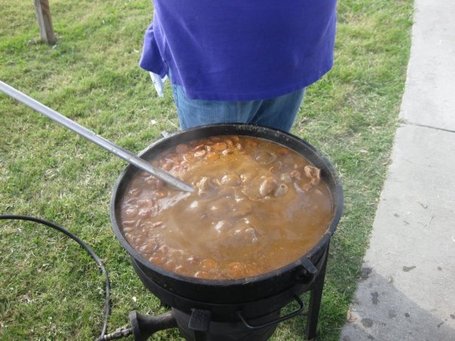 So to 3k-ify a line from Band of Brothers, if someone asks me if I'm tailgater, I'll proudly say, "No. But I drank in the company of tailgaters." So what are your thoughts on tailgating as a subculture of the overall sporting culture? Do you consider yourself a tailgater? Is becoming one your next New Year's Resolution (those never work out, BTW)? Are you just there for the food and booze? Or do you eschew the whole scene altogether?

Marisa Miller, I believe you have something to show us?