Captain of the Tailgate: Equipment

Share All sharing options for: Captain of the Tailgate: Equipment

So we talked about the food and the drink, the two obvious necessities to any tailgate, but let's not forget the tool of the trade: the grill.

Grills are one of the last honest vestiges of manhood (not these though).  The blatant symbol of fire, a Promethean ode to man's dominance over the elements (although I'm sure some Green Bay fans would admit the elements win most of the time), grills are the landscape on which we craft a meaty opus to hand out to friends and family and tell them, "Eat this animal flesh, and pay homage to my power."  Too much?  Maybe.  But grills are good.

To me, the top tier of 2011 NFL Grill Draft prospects include three competitors: Weber, Char-Broil and the Big Green Egg.  What's your grill of choice?  Sure, I'm still cranking out brats on the $25 grill I got at Lowe's, but for the professional tailgater, that just won't do.  You've got to have a grill if you're going to get at your arteries: 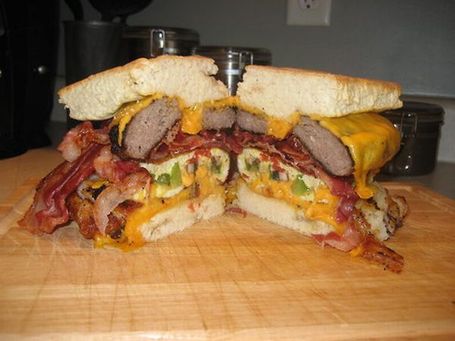 and that's the whole point.  So what do you grill on?  Any tips or tricks?  Any other necessary equipment I failed to include?  Are you a charcoal, gas or wood guy?  And now for Marisa Miller's expert swordsmanship: