The PBP: gaps, techniques and the Hollis Thomas effect

Share All sharing options for: The PBP: gaps, techniques and the Hollis Thomas effect

I know I suggested doing the next episode on the O-line in the last PBP, but with the signing of Hollis Thomas, I thought this had more immediate relevance.  Today's Playbook Projector asks a couple questions:

You'll often hear commentators or sports journalists refer to gaps or techniques.  Let's look at what those mean before we get into our 2009 D-line.

"Gaps" refer to the spaces in between offensive linemen.  Take a look:

Let's work from the inside in.  Your "E" gap generally is assigned to CBs on a CB blitz.  They'll shoot the inside shoulder of a wide receiver to hold down that side of the interior offense.  The "D" gap is an option for the strong side DE or LB to come around the TE if he's assigned to block and not run a route.  Your "C" gap refers to the outside gap of the offensive tackles, a common gap assignment for your RDE.    The gap in between the OTs & Gs is the "B" gap; DEs will often attack this gap on run plays if the have outside help (think Victor Adeyanju) or a DT may be assigned here to contain plays where the offense is moving horizontally instead of vertically.  The "A" gap is the most interior gap.  Envision that 4th & inches play where you're expecting the QB to run up the hip of his center to eke out a 1st down.  This is where he'll end up once the referee peels off all the bodies on top of him.

Now on to techniques: 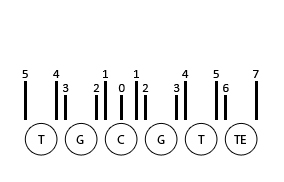 While it looks a bit more crowded, it's not as if all of these are assigned on a given play; they just refer to the options defensive linemen have in terms of where they line up.  In other words, a true nose tackle will line up at the "0" tech, directly in front of the center.  This was where we saw Adam Carriker lined up most often last season and where Thomas will probably set up this season.  The remaining six techniques refer to the shoulders of the offensive linemen.  A "3" technique refers to the outside shoulder of the offensive guard, respective to which side of the line a D-lineman sets up.

So now that we've established the concept of gaps and techniques, let's look at how the Rams' D-line might line up: 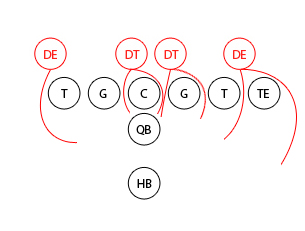 I'm going to approach this from left to right.  The RDE, who is generally your strongest DE, is set up in the "5" tech and assigned the "C" gap.  Hopefully, he can get around the LT quickly and come from the QB's blindside for one of those sacks we love to see (when you're on defense...).  Your RDT, here set up at the 1 but could also set up at the 0, tries to slide inside either A gap to stop the HB from feeding through the middle or to disrupt the pocket the QB is expecting.  On the right side, we see some options for the D-line.  The LDT, set up at the 2, has the option of taking the A or B gap.  Similarly, the LDE, set at the 5, can either go for the C or D gap.  The strong side D-linemen's decisions are usually determined by whether they assume a run or pass attack., and, for the LDE, how the TE is assigned.

The LDT may try to slide through the B gap (again, in between the G & T, to free up the LDE on a pass play.  That way, the LDE only has to deal with the TE; if the TE happens to be assigned a route instead of a block, then both the LDT & LDE will try to sweep around the outside to bring pressure into the pocket.  A run play, however, requires an interior approach from the DTs.  Let's look at how a HB counter play looks and how the D-line's initial approach makes a difference: 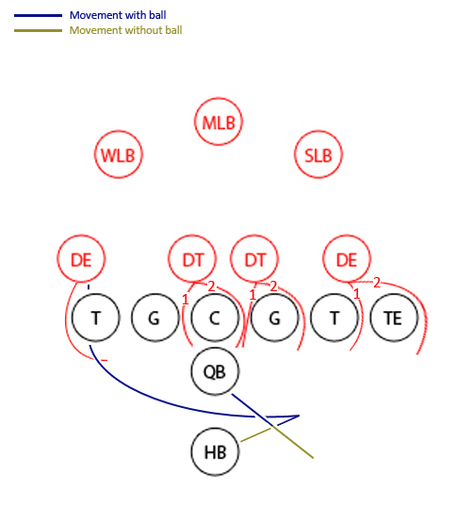 The offense is hoping that once the HB makes his move toward the right, the D-line will take their "2" pursuits to free up the left side.  If, however, that RDT (Hollis Thomas) takes his "1" pursuit and is able to get into the backfield, he can contain the run and negate a big play.  Although the offensive and defensive formations are different, check out this video of two counters then-Gator Percy Harvin ran with huge success.  The're both from from UF's victory against South Carolina last season that saw Harvin run for 167 yards on 8 carries

In the first play, notice the NT for South Carolina took his "2" pursuit which opens up a huge lane that TE Aaron Hernandez (who is one of my #2 NFL prospect TE for the 2010 Draft) helps seal with his block on the LB who's assigned to the HB.  In the second, look at the LB corps which consists of 5 players once the ball is snapped; four of the LBs are dragged to their left by Harvin's initial move.  The only LB who had a chance of stopping him has his lane to Harvin impeded by Hernandez again.

If Hollis Thomas can use his bulk and strength to carry through the interiors of offensive lines and prevent teams from setting up their running game with ease, we have made a great pickup.  If, however, he plays the same role as La'Roi Glover did last year, we could see this kind of play several times over, much to our dismay.

As always, comments, critiques and suggestions are always more than appreciated.  On the next PBP: the O-line and Jason Smith.