Ah the weekends of summer.  Time to break out the old lawn mower and make your lawn better than the one next to yours.  The season to experiment with alcohol and juice in the hopes of making that ultimate refreshment.  And a time for training camp updates here at TST.

- Fresh of his recent appearance on Wednesday's episode of TurfShow Radio, Will from RamsHerd drops off a summary of the goings on yesterday.

- Our other guest from the show this week, Jeff, adds his own report complete with photos courtesy of Jeff's brother at Rams Gab.

- Bill Coats tells us on his blog, Rams Report / Around the Horns, that yesterday was more physical than the Rams have been in recent camps.  Some inspiring notes at the end.

- Hungry for video from yesterday?  The P-D serves up a Jason Smith appetizer, with Steven Jackson as the main course, and offers a wonderful Spagnuolo for dessert.

- Mike Sando uses his blog to look at Larry Grant and tie him to the 49ers who drafted him.  Grant got time at the strong LB spot with the first team yesterday.  This is the only real LB spot up for contention with Spoon on the weakside and Laurinaitis expected to hold down the MLB spot by the time the season begins.

- The P-D's Bill Coats gives us more from Action Jackson with a bit of Keenan Burton tacked on at the end.

- Speaking of Burton, Bill Coats spoke to him and passes on Burton's desire to win the starting job.  Good to hear; if he earns it, it will certainly be good to see as well.

- The Shutdown Corner, Yahoo!'s NFL blog, has their offseason progress report up for the Rams.  Nothing we don't know, but it certainly shows you how little non-Rams fans are paying attention to the developments.  Check this out:

Really?  The defensive line isn't?  I wonder if people have just assumed Carriker is developing well since they haven't heard much of the opposite.  To be fair, I'm not bashing the Corner.  I generally like what comes out over there, but this was, let's say, poorly "researched" and certainly not in line with the consensus over here at TST.

- In case you've forgot, the Rams have some serious issues at the top of the franchise to deal with.  Jim Thomas investigates the current situation with the stadium and looks at what it would take to push the Rams out of St. Louis.

Just to pass along, I got some photos from my boy last night; he went to the Chelsea-Club America game at the Cowboys' new stadium.  If you thought they had spared some cash on the Jumbotron, Jerry Jones is somewhere laughing at you: 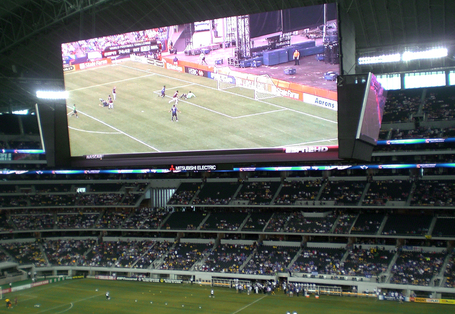 That's all for now.  Have a great Saturday, TSTers!