The PBP: the 4-3 defense and the arrival of James Laurinaitis

Share All sharing options for: The PBP: the 4-3 defense and the arrival of James Laurinaitis

Well a good weekend to all. Yeah, it's been awhile since the first PBP in May where we looked at the "smash" concept and how Donnie Avery could be employed.  This time, we're going to step back from a concept and look at the 4-3 defense in general and how the MLB, or in our case James Laurinaitis, holds a 4-3 together.  As always, questions and criticisms are more than welcome.

A quick note before we dive in: I'd like to thank hoosierteacher of MileHighReport University fame.  If you're eager for some serious X's and O's, it's the best repository for football knowledge that I've found on SBNation.

The 4-3's origins are shrouded in mystery.  Legend has it that a virgin princess high in the mountains held a map... Not so much.  The 4-3 developed in the '50's as a response to two changes to the game: quicker RBs (as opposed to the traditional bruisers) that were eluding defensive lines and short passes beyond the linemen's reach.  Some credit Tom Landry when he was the Def. Coord. for the Giants, others look to Garrard "Buster" Ramsey's time with the Detroit Lions.  Some fingers point to Bears great Bill George (who played 1 year with the Rams in 1966) who began to drop back off of the line in a 1954 game against the Eagles and thus shifting from a lineman to a MLB.  Really, it was the natural progression from an almost entirely physical game to one that featured more speed and athleticism on offense.

The 4-3 is named so because it employs four lineman or down linemen and three linebackers.  Let's take a look at a base 4-3: 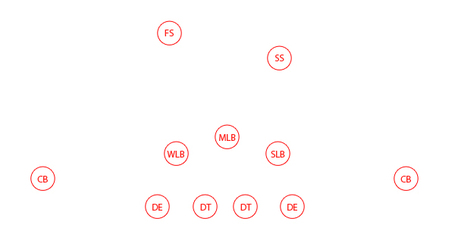 Your four down linemen consist of two defensive ends (DEs) and two defensive tackles (DTs).  Your right side DE (RDE), who you can find above under the weakside linebacker (WLB), is typically your strongest DE.  Playing on the weak side, he doesn't have to contend with a pesky tight end.  Plus, his route to the quarterback comes on his blind side so that the QB won't see him coming.  The LDE has to contend with a TE on the strong side, but often faces lesser talented tackles.  Think Alex Barron in past years.

The defensive tackles clog the middle and are expected to both play a role in run and pass defense.  Unlike the defensive ends (who match up against two offensive linemen), the DTs have to deal with three offensive linemen: two guards and a center.  Most 4-3's assign a DT to the nose tackle position to take on two OL - the center and a guard.  In the past two years, this is where you've seen Adam Carriker play, but word is he's moving over, so expect a new name (Dorell Scott? Clifton Ryan?) to line up as the NT.

The linebackers are the centerpiece of the defense.  The weakside (often referred to as "Will") and strongside ("Sam") linebackers roam the borders of the second tier of defense while the middle linebacker ("Mike") plays the central role.  I'll get back to this at the end of this piece because I want to highlight the addition of James Laurinaitis to this defense and what that means, particularly in stopping the run.

The secondary looms in the backfield as protection against the pass.  Strong safeties play a large part in run coverage, however, so that's why they often line up closer to the line of scrimmage than the free safety (as seen above).  I'd like to do a piece on the secondary, since we have three solid talents back there in Atogwe, Butler & Bartell, so feel free to hit me up with some PBP demands on that front.  But let's move on to the issue at hand: Animal, Jr.

Here's how hoosierteacher approaches the value of the 4-3:

There are several reasons for the popularity of the 4-3.  First and foremost is the application for the 4-3 at scrimmage.  In football theory, there is a concept amongst coaches that a defensive lineman (because of the rules governing what linemen on both sides of the ball are allowed to do) is worth 1.5 offensive linemen.  To breach the offensive line (5 men), you thus need at least 4 men (4 X 1.5 = 6).  If you take away one DLinman, you have 3 men (with the relative value of 3 X 1.5 = 4.5; not enough to overcome the offensive linemen).  Thus, in a 3-4 formation the defense is almost always expected to send in a linebacker.  The offset for the 3-4 is that the offense won't know where the fourth rusher is coming from.  The 4-3 is less deceptive than the 3-4 in that respect, but is starts with four potential rushers ready to come at the QB in every play.

Let's look at the set up without WRs or DBs: 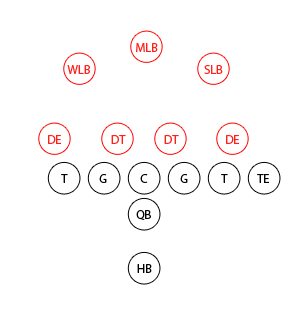 You can look at the top and bottom of the picture above and see the battle forming in your head: it's a clash between the MLB & the HB.  Strangely enough, it's often that simple.  Everybody else smashes into each other, the HB chooses a lane, and attempts to escape the clutches of the MLB while pursuing that lane.

So this is how the assigments would look in a man-to-man playcall for the LBs before the snap: 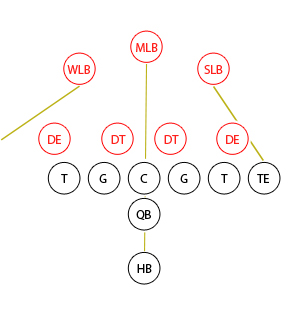 Some thoughts from ht on the MLB in the 4-3:

The WLB has coverage against the slot receiver, the Sam takes the TE, and the MLB keys on the HB.  Why should this simple image mean anything to Rams fans?  Because unlike the Rams of the last three seasons, this year's Rams will have a pure MLB anchoring the defense.  In drafting James Laurinaitis, the Rams can enjoy the additional benefit of moving Will Witherspoon back over to the Sam spot, his natural position where he excelled from 2003 through 2005, his final season with the Carolina Panthers.

The move allows Witherspoon to take advantage of his speed and quickness, which is well above average for the linebacker position, as well as helping Laurinaitis utilize his instincts and tackling abilities.  Witherspoon has great pass defense instincts, but was a step slower on run plays.  Given his lack of physicality (which many would rephrase to read "weak tackling skills"), he fits more on the outside as someone who can contain and shuffle through seams.  Laurinaitis is a bulldozer of a linebacker, constantly willing to throw his 6'2" 250 lb. frame into oncoming traffic.

Will Laurinaitis make every tackle, invade every gap, or finish every play?  Of course not.  But he does give us a significant upgrade at two positions: by coming in and filling the MLB spot, he allows us to upgrade at SLB as well.  Check out the clips at 0:51, 1:00 and 1:36 in this highlight reel:

His pursuit is tempered by his insticts which serve him well consistently.  With added experience, he can be a perfect MLB for this defense moving forward and a great field general to lead the Rams to success.

So that's it, gentlemen.  The 4-3 in all of its basic glory. Again, huge thanks to hoosierteacher for his help.

It gets a hell of a lot more complicated from here on out, so get some rest.  The next time we fire up the projector, you better be ready...