Share All sharing options for: The PBP: Avery's quickness & the Smash scheme

Welcome to the Playbook Projector, Rams fans, where we get into some Xs and Os to look at some plays we plan on seeing, if not in their entirety then partially, to exploit our opponents in 2009.

So let's fire up the playbook projector and look at how we can use Donnie Avery's speed in the "Smash" scheme.

The "Smash" is a simple, effective scheme that is designed to exploit the Cover Two out of any 3-WR Ace/Singleback set.  To get everyone on the same page, here's how our offense is going to line up for this play: 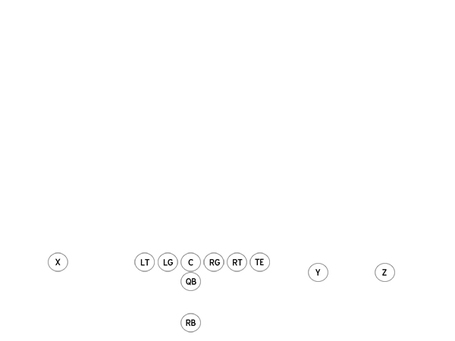 Donnie Avery lines up in the slot (the Y WR), and Keenan Burton is our split end (Z WR); you could probably guess, since this is an Avery-specific play, the split position won't get as much yardage as the slot receiver on this, although Burton's going to have a significant role in this one nonetheless.  So let's look at the play and go through the assignments. 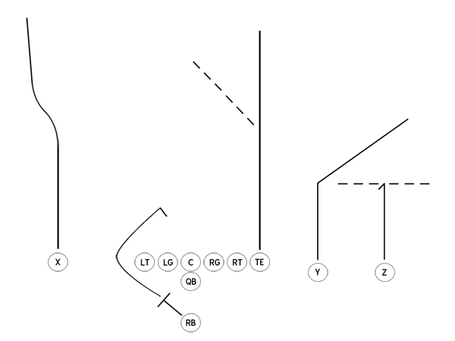 Let's take this left to right, or really, least important to most important.

Our flanker (X WR), either Laurent Robinson or Brooks Foster, is essentially going to pull as much as possible up the field on the left.  You can see at about 12 yards, he curls left to suggest either a slow curl or corner post, but really, it's just to pull the free safety or weak side linebacker along with the CB down field.

The running back (nickname coming soon) helps the LT cover the QB's blind side before popping around the O-line to give the QB an underneath option as well as to draw the strong side or middle linebacker.

Randy McMichael bursts through the linebackers and has the option of either moving straight downhill or angling inside; he's the third passing option here, and should be open, but it'll take some time to separate.  Now for the focus of the play.

Your split end, again either Robinson or Foster, needs to make a good read on the CB on his side of the field.  Avery won't play the defender; he's focusing on hitting top speed and making a good move, either a roll or hard cut, to get to that 20-25 yard area at the end of his route where he can make the catch and stay in bounds.

In order for Avery to be able to "ignore" that CB, the split end has to correctly identify the coverage. If it's too tight, he needs to cut to the outside.  That move will either draw the CB, leaving Avery open, or, if the CB ignores the cut, give Bulger an easy 8-yard out.  Here's what that option looks like: 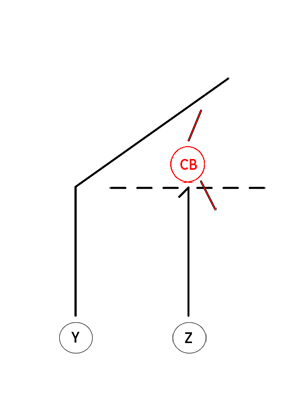 Again, the CB has to commit to either coming underneath the out, or dropping back to Avery.  Since Avery makes his move before the split, Burton/Robinson should be able to gauge what the CB's reaction is; the window for that "gauge" is about 1 second.

Now the reason this a play for Avery is that the slot receiver on this play needs to hit full speed (and full speed has to be pretty fast) once he turns into that corner.  A slow receiver gives either the SS or CB too much time to properly cover down on both wide receivers; however a fast slot WR denies the SS time to adjust to the CB's decision, which if made with hesitation or confusion, will allow the CB to find a nice area up the field near the sideline.

So, just to understand the full context, let's look at the play as a whole: 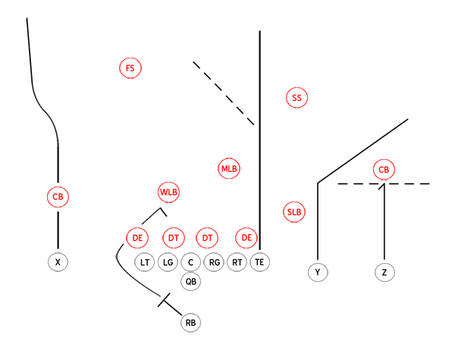 Just to sum it up, this play exploits a strong safety's lack of pass protection skills by forcing the CB to choose between a speedy corner route and a precise hitch, out or in by the split WR.

Avery ran a nice example of this against SF in week 16; expect to see it again this season.  Someone come shut this damn projector off.  I can never figure out how to work these damn things...