Rams history minute: Kicking your way into the record book

Share All sharing options for: Rams history minute: Kicking your way into the record book 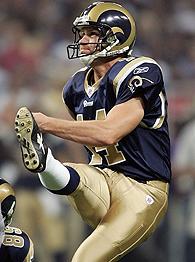 Well, it's not anyone you'd directly associate with the high-flying offense of the Greatest Show on Turf era. However, he did play during that time, and racked up a lot of points thanks to that storied offense.

Of course, the answer is K Jeff Wilkins. His magic leg put ball through uprights for the Rams from 1997-2007, before being replaced by current kicker Josh Brown. With 428 extra points and 265 field goals made, Wilkins scored 1223 points for the Rams. Wilkins had the benefit of joining the Rams as a young player, in 1997, his age-25 season. Good timing helps too; Wilkins led the league in extra points twice - in 1999 and 2001 - as the Rams offense rolled up opponents.

Wilkins record is likely to stand for a long, long time.