With the #8 pick in the TST mock draft, Jacksonville selects...

Share All sharing options for: With the #8 pick in the TST mock draft, Jacksonville selects...

With the 8th pick in the draft, the Jacksonville Jaguars select Jeremy Maclin - WR - Missouri 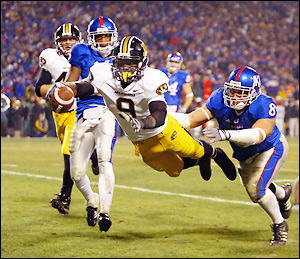 A lot of people are thinking the Jags will draft a QB of the future here, and they just might, especially with all the talk lately that USC's Mark Sanchez might be the best NFL QB in the draft this year.

The Jags QB situation should be familiar to Rams fans. They just sign David Garrard to a pricey contract a year ago, only to have him look entirely too mediocre for what he's being paid. Garrard doesn't have as many good season's on his resume as Bulger, but his '08 season should be enough for another year without anyone breathing down his neck...or without the team having to tie up a boatload of cash for two QBs.

Garrard ought to be rooting for the Jags to take Maclin, a guy who'll give him someone to pass to, other than Matt Jones.

Green Bay, represented by MathB, is on the clock. Get your pick to me ASAP.