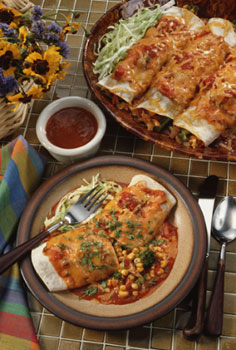 Kyle Boller, the Rams newly acquired backup QB, likes chicken cheese enchiladas. Adapted from a traditional Mexican snack of a corn tortilla dunked in chile sauce, few dishes from south of the border are bastardized as often as the enchilada. On the other hand, home cooks and restauranteurs alike can appreciate the enchilada for its ability to assume so many different forms. It's as versatile as the cook is creative, and for that it is to be appreciated.

Of course, if you desire authenticity in your enchilada use a corn tortilla, stuffed with beans and/or carnitas, smothered in red chile and topped with a dollop of Crème fraîche flavored with a little salt and lime juice.

Now, can we glean any insight into Kyle Boller from his choice of enchiladas? Sure. The chicken says maybe something for the healthier side (he was making them for his gal pal after all) and the cheese could possibly mean he's getting his protein, getting in game shape after an injury-plagued year...or he could just like cheese. Let's assume the former. What was Gus Frerotte eating? Who knows, and quite frankly who cares. Boller's choice of enchiladas doesn't give us much insight into what kind of backup QB we're getting, but he does have way more potential than the 400-year-old Frerotte, like the versatile enchilada.