Long vs. Dorsey: smoke signals before the 2008 draft

Share All sharing options for: Long vs. Dorsey: smoke signals before the 2008 draft 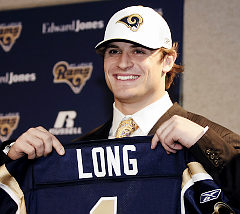 Two days before the draft last year, there was heavy speculation that the Rams would draft LSU DT Glenn Dorsey. Bernie Miklasz from the PD said there was an "80% chance" Dorsey would be the Rams pick at number two. According to sources inside the organization, the Rams decision makers were divided between Chris Long and Glenn Dorsey. Jake Long was in the mix too, until he signed with the Dolphins the Tuesday before the draft. It was said that Devaney was in the Chris Long camp while the defensive coaching staff wanted to draft Dorsey, the debate emerged around what the Rams needed more a DE or a DT and much consternation about the need for another DT after taking Carriker the year before and watching so many DTs go bust this decade.

Did they pass on him late in the game because of his injury issues? Hard to say, but Drosey was highly coveted as the draft approached last year, billed as the draft's best defensive prospect, at least the one with the highest ceiling. It could have all been a smoke screen to solicit trade offers from other teams.

Hindsight being 20/20, the Rams ultimately did better drafting Long than Dorsey. The LSU product would have left Adam Carriker with no real place in the 4-3 defense. Sure, Carriker would be fine as a DE in a 3-4, where he'd be lined up over a guard, essentially playing a role similar to DT in the 4-3. Notice the Chiefs are having similar conversations about what to do with Dorsey as we've been with Carriker. As usual, 3k said it best in the days leading up to the draft:

Dorsey
First off, Dorsey is a hoss.  I have no doubts he will be a great DT; but I could say the same for Carriker who already has a year's experience better.  When it comes down to it, I'm not optimmistic about putting Carriker at DE full-time.

Top tier tackles have been handling power DEs and suffering against more agile ones (think Freeney, Um enyiora, DeMarcus Ware (no he's not a LB.)).  That suggests to me you need athletes on the outside and beasts inside.  Could Carriker and Dorsey be the best DT tandem in the NFL?  Probably.  Does that significantly upgrade our pass rush and strengthen the long-term health of our line overall?  Probably not.

Chris Long
I think Howie Jr. is the best fit for the #2 pick for us.  He injects youth at DE, along with power and speed.  Plus it's hard to question the intangibles of Howie Long's son.  I think he and Dorsey will both be successful in the NFL, but it comes down to position.  What position is most important to us now and in the near future?  I've got to go with d-end.

And then there was that potential trade with New Orleans, but that'll have to wait for another post.