With the #18 pick in the TST mock draft, Denver selects...

Share All sharing options for: With the #18 pick in the TST mock draft, Denver selects...

With the #18 pick in the draft, the Denver Broncos select Clay Matthews - OLB - USC. 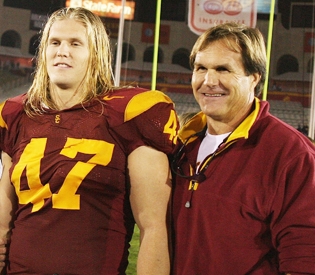 I was hoping either Tyson Jackson - DE - L.S.U., or Rey Maualuga - MLB - USC would have been available, because Denvers biggest need is their front seven. I seriously considered Robert Ayers-DE-tennessee here because he had a good combine workout and because he held is own against OT Micheal Oher at the senior bowl. I just think it is still a little high in the draft for the 5th best DE, so Denver will choose Clay Matthews-OLB-USC. He will be a tremendous help as Denver goes to a 3-4 defense, as he is quick and strong (ran 4.58, and benched 23/250lbs at the combine). Plus not many players have the NFL bloodline that he does.

Back-to-back-to-back USC players, hate the Trojans all you want, but it speaks well fo their program. Nobody would bat an eye about this pick now, but it wasn't all that long ago Matthews wasn't considered a first rounder. Funny how things change. This is a great pick.