With the #14 pick in the TST mock draft, New Orleans selects...

Share All sharing options for: With the #14 pick in the TST mock draft, New Orleans selects...

Here with the pick is rams13rocks. 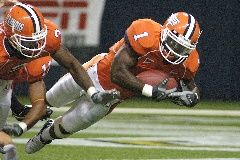 In my opinion this is a bit of a reach, but the Saints are in desperate need of a cornerback. I would have Malcolm Jenkins here as there is absolutely no way they pass him up, but he was taken a couple picks ahead. Davis can be a very good cornerback if he can get past his character issues. However, the Saints are so desperate for defensive backs that I think they will risk dealing with his character issues.

The Saints obviously won't go offense with this pick, but I also see DT and LB as possibilities. They could really use an outside linebacker to form a strong linebacking core next to MLB Jonathan Vilma. I see Brian Cushing, Everette Brown, and Clay Matthews as possibilities if they believe Davis is too much of a reach.

However, Davis is clearly their best option, possessing a combination of size (6'0'') and speed with a lot of physicality. If possible, I think the Saints will try and trade this pick for more picks. The Saints' offense is set and with a DT, LB, and CB, they could easily be a playoff team. They obviously realize this and could trade for additional picks and later draft one of the OLB's mentioned before. There are a few defensive options for the Saints to draft. However, because of Davis' upside, I believe the Saints will draft him with the 14th pick in the draft.

On the clock: Houston represented by Jombari.