With the #12 pick in the TST mock draft, Denver selects...

Share All sharing options for: With the #12 pick in the TST mock draft, Denver selects... 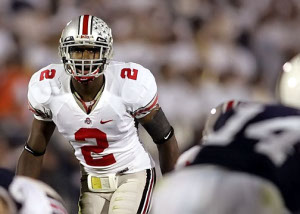 The pride and joy of the Rocky Mountain region has finally been out of the news the last week and that's what Josh McDaniels, Brian Xanders, and Pat Bowlen wanted as the draft approaches. They are in full evaluation mode across the board and it doesn't take a rocket scientist to see their defense is pathetic.

While Malcolm Jenkins doesn't fill their greater defensive needs upfront or for a pass-rushing linebacker, the grade and value for Malcolm Jenkins is just too high at #12. The Broncos can let him learn at the feet of Champ Bailey and Brian Dawkins -- two pretty good teachers.

I considered Brian Cushing, Ray Maualuga, Tyson Jackson, and Everette Brown at this spot as well. But I'm guessing that one of them will make it to #18 and they're all equivalent values and all would fill a need. Thus, let's take the best defensive player available and roll on.

What about Mark Sanchez you say? The new Broncos' Boss is a firm believer in his offensive system and not the offensive player. Just as Shanahan used to plug-and-play running backs, McDaniels is going to plug in either Orton or Simms and let them manage the QB spot. Now if Sanchez is still there at #18...

That's a smart, safe pick at #12, and could very likely shake out that way...depending  on the strange saga unfolding in the Denver front office or if they opt to swap their 12 and 18 picks with the Rams, which is doubtful.

Big thanks to cards&broncos for the pick.

On the clock: The Redskins, represented by salukihoops. Get your pick in to me asap.