With the #10 pick in the draft, San Francisco selects...

Share All sharing options for: With the #10 pick in the draft, San Francisco selects...

And we round out the top ten with San Fran's pick. So, without further ado here's AbsoluteMoose with the pick. 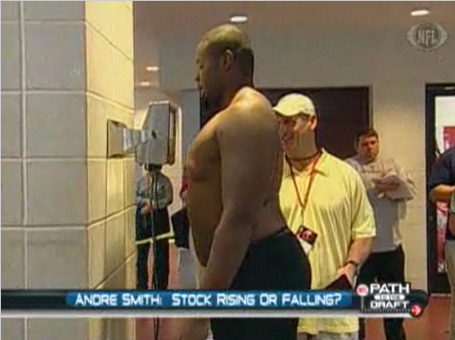 With Maclin and Crabtree off the board and all the premiere tackles as well, the 49ers select Andre Smith. As seen in Alabama, he is a mauling, dominating big man on the end which is what the Niners are in the market for. They are looking to put emphasis on a run-first offense behind Frank Gore. Smith, who does have some maturity issues and other mental related problems will be a perfect fit in the Singletary smash-moush special run game. Singletary will have no problem breaking Andre Smith and making him a Pro Bowl grade tackle. I mean, look what he did with Vernon Davis. The other potential Niners picks could be Mark Sanchez as well.

I'm a little surprised with this one. The Niners have made some moves at OT recently, trading up for Joe Staley a few drafts ago and signing free agent Marvel Smith this spring. That might be enough, but Smith comes with injury history.

That's a good point about Vernon Davis, affectionately known as "VD." I think whoever draft's Smith if the coaching staff is solid and gives him the kick in the ass he seems to need - if, if, if - he's going to make a fine tackle. Then again, if there was a recipe for taking knuckle-heads with talent and getting them to focus it all on the field, well...I don't know, but there's gotta be a Nobel Prize in there somewhere.

That's the top ten. We'll talk about the top ten picks in the TST draft this weekend. In the meantime, let's keep this show on the road. Buffalo picking at #11 and represented by JoeyBombs is on the clock.