With the #5 pick in the Turf Show Times mock draft, Cleveland selects...

Share All sharing options for: With the #5 pick in the Turf Show Times mock draft, Cleveland selects...

Our little excercise in community, community mock drafting that is, rolls on. Representing the Cleveland Browns with the 5th pick is Hetfield72. And who will they be picking?

With the 5th pick in the draft, the Cleveland Browns select  Michael Crabtree - WR - Texas Tech 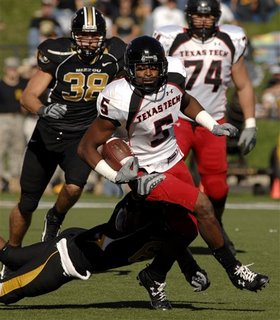 The draft has not fallen out quite as expected for the Browns so far. This spot would be a great place for the Browns to trade down and pick up a few more draft picks. With a top prospect like Jason Smith still hanging around, it could be possible to tempt a team to move up and grab him. However, since the pick can't be traded it comes down to a few different prospects: Everette Brown, Jason Smith, B.J. Raji, Michael Crabtree.

Brown: The Browns biggest need is defensive pressure and with spots to fill at OLB. However, with both Curry and Orakpo already off the board it is hard to justify reaching for the third available OLB/Hybrid DE so early in the draft. Everette Brown has to be considered because he probably has the skills to move to LB and be successful. But again, you can't feel great about going with "probably" this early in the draft. Also, Mangini's first round experience with Vernon Gholston last year (#6 overall) may have soured his taste for grabbing athletic DE's early in the draft to transition them to OLB.

Smith: Jason Smith would be a luxury for the Browns and doesn't make sense. Joe Thomas has LT locked down for the next decade and drafting a guy you know will be your future RT at the #5 pick is unrealistic.

Raji: While the Browns do need defensive help badly, DT is one spot that is in decent shape at the moment. With Shaun Rogers in the middle eating up 2 and sometimes 3 lineman, it would just be a luxury to add Raji and the Browns can't afford luxuries with the issues they need to address.

Crabtree: Second to their defensive pressure problems, the Browns are quickly approaching full-on crisis mode when it comes to their WRs. Braylon Edwards was dropping balls left and right last year and has publicly stated that he doesn't feel at home in Cleveland and the fans are against him. He is even rumored to be potentially on the trading block. Donte Stallworth was looking like a FA bust even before his recent problems with the law, and right now you don't know if he will be around for the season let alone if he can contribute. David Patten (recently acquired this offseason) is 34 and nearing the end of his career. Another major target in the passing game, Kellen Winslow Jr., is gone. So the question is: Whoever the QB is for next season, who will they throw it to? The Browns need so much help in this area that they can justify picking Crabtree at this point.

While the Browns need to build up their defense to get pressure, the two main prospects for that position are already gone. Crabtree is an explosive WR and one of the most talented players in the draft. He fits a need and hopefully the Browns can address their defensive issues later in the draft.

Don't discount the possibility of the Rams drafting Crabtree. He's a dark horse candidate for them at #2, though it seems like Rams nation is pretty set on either Curry or Jason Smith.

The Bengals, grrr, are on the clock, being rep'd by lwuvrams.