With the #4 pick in the Turf Show Times mock draft, Seattle selects...

Share All sharing options for: With the #4 pick in the Turf Show Times mock draft, Seattle selects...

When it comes to picking for Seattle, it's gotta be tough, as a Rams fan, to not pick Mickey Mouse or someone like that. Props to ram_rod for making an imformed selection for the Sea Chickens. And who did they select in the TST Community Mock Draft? 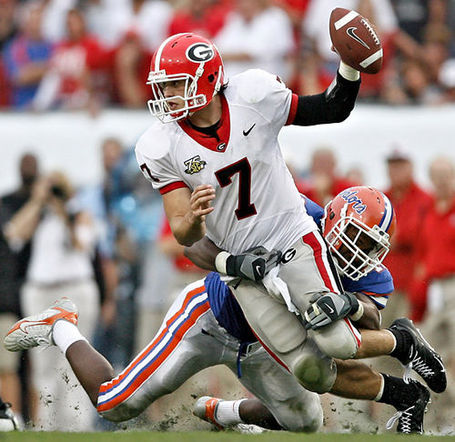 Seattle played poorly last year, there is no doubt about that. But it appears it was more injury then talent that caused this low record, as not only were most of their receiving corps injured, but Matt Hasselbeck was as well. With the signing of T.J. Houshmanzadeh, picking Michael Crabtree or Jeremy Maclin does not make as much sense anymore, especially with the return of Nate Burleson and Deion Branch and the emergence of John Carlson at TE. As far as defense goes, they acquired both Cory Redding and Colin Cole, which would negate the need to draft a DT so high, axing the idea of B.J. Raji.

While their tackles are getting old, with a draft this loaded with tackles it makes sense to pick one possibly in the second round and develop him behind Walter Jones. The point is, with a QB who is getting older, it is a great time to solidify your next 10 years by picking a quality QB who can develop under a pro-bowler and take over the reins of a good team when the time is right.

Cleveland, represented by Hetfield72, is on the clock.