With the #3 pick in the Turf Show Times mock draft, Kansas City selects...

Share All sharing options for: With the #3 pick in the Turf Show Times mock draft, Kansas City selects...

Representing the Kansas City Chiefs in the Turf Show Times community mock draft is jroman, who also blogs the Rams over at Rams Gab. 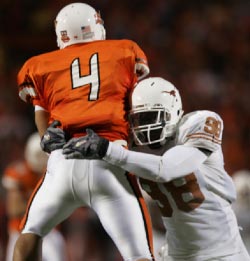 The Kansas City contingent is very upset that Aaron Curry is unavailable. But Scott Pioli likes to draft D-lineman and pass rushers high in the first round and since they have a hole plugger in Glenn Dorsey, that eliminates BJ Raji. Orakpo could play outside linebacker in the 3-4 (which Pioli may have his team play). The Chiefs will move Orakpo all over the field so that the opposing line doesn't know where he will be coming from. He's a big, strong quarterback terrorizer and that's what the Chiefs need. It is a small reach to take him here (a few spots ahead of his projection) but the Chiefs certainly missed Jerod Allen in 2008.

Seattle, represented by ram_rod, is on the clock.