With the #2 pick in the Turf Show Times mock draft, St. Louis selects...

Share All sharing options for: With the #2 pick in the Turf Show Times mock draft, St. Louis selects...

The Turf Show Times community mock draft rolls on with a pick that promises to warm the heart of so many Rams fans. Here's Rams since day 1 with the pick... 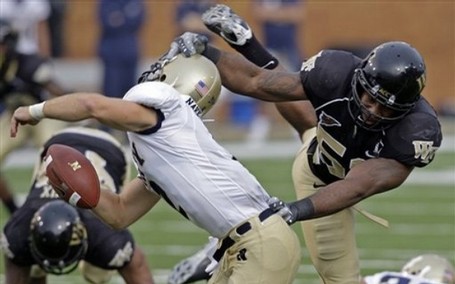 With Monroe gone, the obvious question is between Smith and Curry. I believe Curry could be an amazing player and the foundation of our defense for years to come. He is a straight beast on the field and could step in day 1 and take our defense to a whole new level. It is clear that this years draft class is deep with offensive lineman which plays into my choice of taking Curry.

Though Smith is at the head of the class, I don't believe there is a huge drop-off from an him and an OT in the second or third round because the draft is so deep. Barron will be playing LT so I don't think we should use the second overall pick in the draft on a RT. A post was up recently explaining that our line could be alright without using the #2 pick on an OT and I believe our line would be fine if we took a lineman to play RT in the second or third round (I like a guy named Phil Loadholt).

Lastly, our defense would be set with the addition of Curry. We would have a solid foundation of players lining up on defense- Long, Carriker, Little (healthy), Witherspoon, Curry, Atogwe, Bartell, and Butler....sounds pretty good to me.

Thanks to Rams since day 1 for the great pick. Kansas City, represented by jroman, you're on the clock.