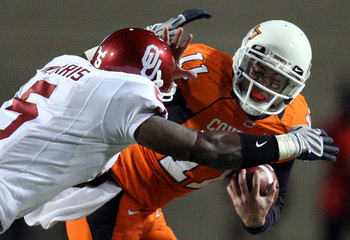 The Rams have been busy working out draft prospects, conducting interviews, and just getting ready for the draft in general (Oh, for a peak at that draft board...). Recently, they held a private workout with Oklahoma safety Nic Harris, after having a formal interview with him at the Combine last month. Who is Nic Harris?

Listed as a safety, many figure him to convert to outside LB at the NFL level based on his ability to play the run and smother tight ends in coverage. Here's a link to his scouting report over at Mocking the Draft, which projects him to go in the fifth round. He was an All Big 12 defensive back for his junior and senior seasons. What's most interesting is his versatility; at various times through his college career he's played nickel, middle LB, and both strong and free safety. That includes special teams duty too, where he'd likely get time in the NFL based on his flow to the ball and ability to make open field hits. He's also an honors student, which, along with his versatility, points to a player who meets the high character standards Devaney and Spagnuolo have talked about recently.

Hmmm, who does he remind you of? If you said last year's seventh round pick Tulsa LB Chris Chamberlain, you win. Chamberlain came in as an OLB with real strength in coverage. Many, in fact, felt like Chamberlain could play safety as well as LB. Of course, Harris sound more like a Roy Williams-type safety turned LB, while Chamberlain seems oriented more in the other direction. Drafting Harris would probably mean a little more competition for depth spots at LB.

Harris is at least the third defense back the Rams have had workouts with, which of course means nothing as far as trying to devine who they'll draft. They also worked out Utah CB Sean Smith and Cincy CB Mike Mickens.