Share All sharing options for: TST Book Review: Boys Will Be Boys

I was thinking it might be nice to expand the sights of TST beyond just Ramsmania into other football- or St. Louis-related stuff every now and then. And so today, I'll try to do a book review. Here's to hoping this doesn't make people want to leave the community; I'm hoping we're not all of the "Books bad, beer good, boobs great" fraternity. I guess we'll see.

So the first installment of the 3k "Reading is OK if it's About Football" series is a book about the franchise I hate the most in all of sports: the Dallas Cowboys. Regardless of whether you love them or hate them, you'll enjoy this book if you enjoy football and the drama that accompanies it off the field (although the Cowboys of the '90's took off the field drama to new heights). Review after the fold. 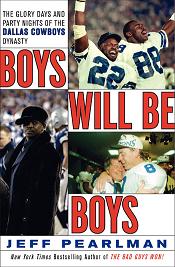 Boys Will Be Boys: The Glory Days and Party Nights of the Dallas Cowboys Dynasty

Jeff Pearlman set out to chronicle the history of the Dallas Cowboys of the post-Landry era. What came out is a pornographized soap opera. Let me add a couple things to that remark.

I don't mean pornography in the sense that the book revolves around the sexual exploits of every person involved with the franchise from the late '80's on, although that plays a large role in the book as does Charles Haley's, um, large pole (Sorry, I couldn't help myself). I also don't want to suggest that Pearlman has glazed over the Cowboys' short-lived dynastic period with undue pageantry or vulgarity. I found that he took that pageantry and vulgarity of the team and presented as such.

What I mean by pornographized is the third definition of the word as defined by Merriam Webster:

3: the depiction of acts in a sensational manner so as to arouse a quick intense emotional reaction

It is impossible to read this book and not experience an emotional reaction to nearly every principal passage of the book, each of with is in and of itself sensational.

The amount of coverage and scrutiny that team would have gotten in the modern political and media landscape would have been unbelievable. Consider this whole Michael Phelps thing; multiply that times at least 100. Whores, drugs, violence: it was a part of that team and it cut short what could have been one of the most dominant runs of any sports franchise in history.

The book opens with an episode that many, including Pearlman, suggest symbolizes the end of the Cowboys mini-dynasty of the '90's: the near murder of a Cowboys player by Michael Irvin. Never heard of it? I'm not surprised. Most fans outside of the Dallas area never heard of it as the occurrence was drowned out by a PR firm that had nearly a decade of experience covering up hookers and coke.

Here's the gist. McIver, a 6'5" 320lb. guard, signed with the Cowboys after two years with the Jets and Dolphins apiece to add some sized to an aging interior offensive line. During the training camp preceding the 1998 NFL season, McIver waited in line to get his hair cut, an otherwise forgettable moment in the sea of memories that make little to no difference in the annals of football history. The only thing that made this moment different was that when McIver sat down for his haircut, Michael Irvin walked in the door. Michael Irvin, who had won Super Bowls, who had enjoyed the most beautiful, promiscuous and fame-hungry hos of Dallas, who had snorted as much cocaine as his hangar-sized nostrils would allow. But when Irvin walked into that makeshift barber shop, the Super Bowls were gone. All that was left was the chaos, and the chaos got to Irvin.

"Vinny, get this motherfucker out of the chair," Irvin ordered the barber. "Tell his sorry ass to wait his fuckin' turn. Either I get a cut right now, or nobody does."

Standing nearby was Erik Williams, McIver's fellow lineman. "Yo, E," he said to McIver, "don't you dare get out of that chair. You're no fuckin' rookie! He can't tell you what to do!"

Sensing trouble, the barber backed away from McIver's head. McIver stood and shoved Irvin in the chest. Irvin shoved back. McIver shoved even harder, then grabbed Irvin and tossed him toward a wall. "I'm the littlest guy in the room," says Kevin Smith, "so I just yell, 'Leon, do something!'" Lett, the enormous defensive lineman, tried separating the combatants. It was no use. "The whole scene was crazy," says Smith. "I couldn't believe what I was seeing. I mean, we were on the same team."

In a final blow to harmony, McIver cocked his right fist and popped Irvin in the mouth. "I just lost it," said Irvin. "I mean, my head, I lost it." Irvin grabbed a pair of scissors, whipped back his right arm, and slashed McIver across the neck. The motion was neither smooth nor slick, but jagged, like a saw cutting felt. The tip of the scissors ripped into McIver's skin, just above his collarbone and inches from the carotid artery.

That's how this 360-page tome begins, and it doesn't let up. There's the coaching handovers of Tom Landry, Jimmy Johnson, and Barry Switzer, none of which went well by any standard. There's Emmitt Smith (vain), Charley Haley (psychotic), Irvin (addicted to numerous vices), Deion Sanders (ridiculously self-centered), Jerry Jones (egomaniacal times 100 to the power of 1,000), and a cast of rotating pitiful individuals who enter the Cowboys as athletes with the potential to succeed and leave humbled, half-witted and saddled with a slew of compulsions from drugs to women to violence.

This era paved the way for Terrell Owens, Adam "Pacman" Jones, Tony Romo and the current cast of characters we see currently in Cowboys uniforms, which is why I found it to be enjoyable not just as a historic volume, but as a primer for what is going on in Dallas right now.

Who will write the sequel to this 10 years from now about the current circus? Not me. The ridiculousness of men getting paid millions of dollars who still feel inclined to have sex with every woman they meet and, for no apparent reason, marry one of them, to excel on the football field and in the strip club, and to put more effort into inspecting the quality of the drugs they buy instead of the quality of the routes they run is tragic.

But that tragedy, like so many classics, is enjoyable. The downfall of so many players I came to loathe both arouses my joy and my sympathy. It is for those two reasons that I recommend this book. If joy and sympathy aren't two good emotions to feel when reading a historical non-fiction book, than what is?

Read it, and pray this never happens to the Rams.