Was it ugly?  Very.  Was it painful?  Surely.  Was it a win?  Apparently.  A win is a win, and I'm more than happy to accept it - the Rams deserved it.  Still, this game proved we are still a pretty bad team.  Let's get to the grades and overreacting.

- Bulger did nothing to win the game yesterday.  Whereas Steven Jackson put the team on his back and carried us, Bulger added extra weight to drag along.  I said in my preview, "I really feel this game comes down to Bulger and his ability to dissect a poor pass defense with limited weapons."  Had it not been for a fake FG and ActionJackson's heroics, Bulger would be getting a lot more heat than he is today.

- On a side note, this has to be the last season for Marc Bulger on the Rams.  Cut him, take the hit, and move on.  There's no reason to pay out his ridiculous contract.

- And on the power slide, where was the desire?  Remember week 1 in Seattle when he went mouth-to-mouth with the Seahawks?  That was desire.  That was the will to win.  I don't know where it went, but I'm not interested in trying to resurrect it in Bulger.

- We all know how great Steven Jackson was/is, but in case you aren't feeling my criticism of Bulger not taking over, here's what it sounds like:

So he did a rather curious thing as he walked into that huddle to start this critical, do-or-die drive. Jackson walked up one end of the huddle and down the other, peering into the faces of his teammates. He stared at the linemen, glared at the tight ends and receivers, and went facemask to facemask with his fullback with one specific purpose in mind.

Afraid to win or scared to lose. 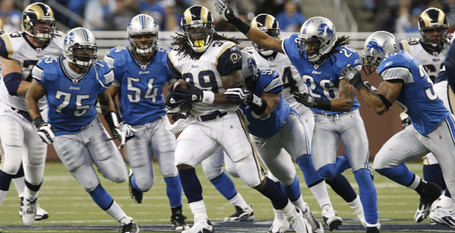 - The standout from this group?  Amazingly, it was Billy Bajema who caught two balls for 43 yards including a crucial 3rd down conversion.  But that says something when your blocking specialist TE was the key receiver.  Sure, Fells made a great play on the FG-that-wasn't, but nothing else.  Which brings up another point - Randy McMichael is done.  Fells and Bajema are a receiver/blocker duo that should work unless we snag a TE in the draft, but I'd feel comfortable with those two in 2010.

- As for WR, Keenan Burton did a good job getting involved early, but once Steven Jackson took over, his services were no longer needed.  Will they be next season with the return of Laurent Robinson?  It's an easy no if we draft a top WR, bring one on through free agency or if Brandon Gibson (who was invisible yesterday save for a mistimed incompletion) develops into something impressive over this last half of the season.  And please, please stop trying to use Donnie Avery in possession routes.  You can't catch slants with your chest, or at least he can't.  He showed it last year in flashes and this year and droves - he has horrible pass catching skills.  Use his feet to open up defenses, not his hands PLEASE.

- After a so-so opening half, the O-line turned it on in the second half opening up chasms for Steven Jackson to rumble through.  There's a reason why he averaged 7.4 yards per run in the second half and it was the play of the line.  Was it a coincidence that Jacob Bell sat out much of the half?  No.  Was it a coincidence that we did it without Incognito?  Yes.  Whereas Bell has been a disappointment for a year and a half, Spagnuolo showed his mentoring ability early this season, turning Incognito from a blockhead into a blocker.  Bell should join Bulger, McMichael and Alex Barron on the market this offseason.

- Speaking of Long, why does he insist on hitting the "C" and running all the way around a pocket?  Make a move at the B once in a while.  It was how Leonard Little got his sack.

- LaJuan Ramsey had two tackled for a loss and Leger Douzable had one.  Doesn't Spagnuolo deserve a top-talent DT?  The Giants are already worried about their defense without Spagnuolo at the helm.  We need to give him the kinds of tools he had in NY if we want to make the most out of his presence.

- And Chris Long got a sack.  I know I said it already, but it's worth repeating.

- I thought this was the worst game by our LB crew.  Stafford dumped off to his RBs for as many receptions as his WRs & TEs combined, and for good results.  Kevin Smith was the Lions' leading receiver (thanks to the gelatin hands of Bryant Johnson).  And some sloppy tackling early had me in hysterics.

- We need to draft a young, sack happy SLB.  I appreciate the effort we're getting out of our OLBs in Larry Grant, David Vobora and Paris Lenon (who had a decent game against his former team), but I'd like to see some talent at the position.  It would be a huge boost to our pass rush to have a better blitzing SLB.

- Teams are going to gameplan away from James Laurinaitis.  He's so much better than anyone else in the front 7, OCs are going to isolate him and take him out of the play as much as possible.  Linehan was somewhat successful in doing it yesterday, though Laurinaitis did end up with 7 tackles.

- BTW, I would like to forget that interception as much as I'm sure James Butler would.  To see a rookie mistake made by one of your most seasoned veterans is, well, something Rams fans should be used to by now.  But I'm not.  For shame, James.

- Quincy Butler didn't play half bad yesterday.  I'm still a bit confused at the revolving door we've had at the #2 CB spot that started with Jonathan Wade, then was handed to Bradley Fletcher whose injury gave way to Q.  I'd just like to see some consistency because...

- Ron Bartell is getting burned way too often.  A top CB could be our biggest need going into the 2011 draft if Bradley Fletcher doesn't come back 100% and make huge strides.  Again, had Bryant Johnson not dipped his hands in melted butter before the game, he could have embarrassed Bartell on numerous occasions.  Instead, he ended up with two catches for 43 yards...on eight targets.  Bartell should send him a thank you card.

- What happened to Oshiomogho Atogwe's interception addiction?  It's obvious coordinators implemented what I'm anticipating for Laurinaitis against Togs this year, but I would still like to see him getting after the deflections more often, especially yesterday.  OJ's only got 1 INT this year, and that came in week 1.  Until we force teams to play at him, they'll just keep going at Bartell.

- Donnie Jones is the best punter in the NFL.

- And yes, it was a great call by ST coach Tom McMahon on the fake.  Fells was beyond wide open.  There's not even a term for how open he was.  US-Mexico border open?  7-Eleven open?  I'll go with open like a frog in science class.  Good call.  If Spags gave it the nod, kudos to him as well.

- Someone needs to block better for Amendola.  He took a beating yesterday.

So there it is.  Not too much overreacting...because I was saving it for this: