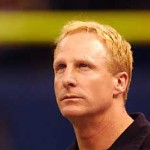 So the Rams formally interviewed interim head coach Jim Haslett for the opportunity to keep his job. Sort of a follow up interview to two seasons and four games as the defensive coordinator and twelve games as head coach, as if those weren't interview enough. We'll know soon how that went. In the meantime, let me ask how you would answer the questions if you we're Jim Haslett?

Here are a few sample questions, which, in my mind, are the only ones that need to be asked. Get your new, ill-fitting standard corporate issue blue suit on and get ready to be interviewed, dear Rams fans.