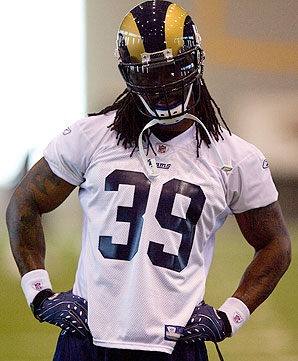 Can Rams RB Steven Jackson get to 1,000 yards? Steve Korte of the Belleville News-Democrat points out in his Ramblings blog that Jackson needs just 217 more yards to reach that milestone for the fourth season in a row. With just two more games and the Rams averaging only 94.1 yards per game (28th in the NFL), it's a daunting task. Let's look at the Rams two remaining opponents to gauge the probability of Jackson getting the 227 yards he needs.

The 49ers have allowed only three 100 yards rushers this season: in week one, Edgerrin James ran 26 times for 100 yards; Julius Jones carried 26 times for 127 yards and a TD in week two; and Bills running back Marshawn Lynch gashed them for 134 yards in week 13. That's it, and it should be no surprise with LB Patrick Willis in the middle. His presence also helps explain why only 15% of running plays agianst them have gone for 10 or more yards, 12th best in the league. Overall, the San Francisco run defense has a dead even DVOA of 0.0%, good enough for 17th best. For Jackson to have the kind of day on the ground he needs to reach 1,000 yards for the season, the Rams would have to have much better run blocking than they're getting from the middle of their offensive line AND a good lead blocker or someone that can get to the next level and hold off the LBs for Jackson.

Jackson should be able to get some yards against the Falcons, who allow an average of 120.2 yards per game on the ground. Their rushing defense has a 9.0% DVOA, 26th in the league. 20% of the rushing plays against Atlanta have gone for 10 or more yards, with 13 runs of more than 20 yards and 3 that went for 40 or more. Five running backs have rushed for 100+ yards against the Falcons this season. The real question in this game is how many rushing yards the Rams will ceed to Michael Turner.

Jackson has averaged just 82.7 yards in the three games since returning from his thigh bruise. Jackson has the talent to reach this goal, but the odds certainly don't favor Jackson getting the 227 yards he needs, not behind this offensive line. Jackson reaching this goal also presumes the Rams can stay competitive through four quarters.