Share All sharing options for: Rams looking for a return man (again) 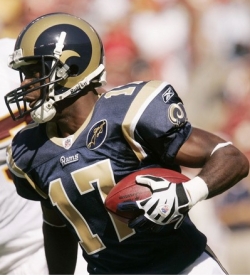 With Derek Stanley now joining the other half of the Rams original 53-man roster on IR, the team will be auditioning other return men.

Kenneth Darby handled kick returns in Stanley's absense last Sunday, with solid results. But it's tough to gauge those two returns fairly since Seattle, on average, allows more yards per return, 26.4, than any other team. They're among the top five in total punt return yardage too.

According to Haslett, the Rams will continue to use Darby on kick returns and turn to Dan Looker for punt returns.

Mercifully, the Rams have just two more games this season. Why not use the speedy Donnie Avery to return kicks? The offense is in the tank, and it's just not reasonable to assume they can start clicking at this point. Let's see what Avery can do returning kicks.

Obviously, Avery's future isn't as a kick returner; he offers too much value on offense to max him out. These last two games are more akin to auditions, giving players and (potential) coaches a look at the skill set among the younger players; hence Darby's increased role. That's fine, but out of curiosity at the very least, I'd like to see Avery return some kicks.